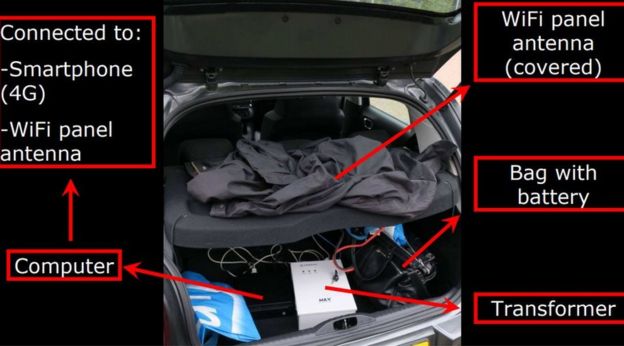 Four Russians, a car full of electronic equipment, and a foiled plot to hack the world’s foremost chemical weapons watchdog.

The Dutch security services say Russia planned a cyber-attack on the Organisation for the Prevention of Chemical Weapons (OPCW) in The Hague earlier this year.

At a press conference on Thursday, Defence Minister Ank Bijleveld said the plan was thwarted with the help of officials from the UK.

1) There are some in the intelligence community who are describing this cyberattack on the Organisation for the Prevention of Chemical Weapons by Russian agents as “amateur hour”.  I find it headshaking too, as what you see in the picture above, and the attack as described, is something that was being conducted 20 years ago and is called “drive-by hacking”.  The equipment in the photo, allegedly from Russian’s premier spy agency GRU, is about 20 years out of date too.  All of what is being described here can be done off a high-end gaming laptop fitted with an off-the-shelf hi-speed wifi card.  Given all that, what is going on here?

2) Cybersecurity attacks are clearly on the rise.  What are doing for yourself to better understand the risks, and how to control those risks, even if you don’t become a cybersecurity specialist?