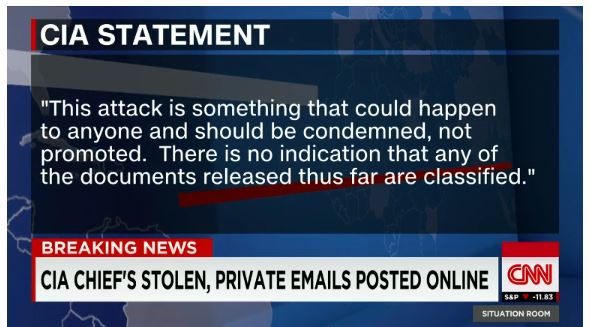 1) The CIA is saying that the hacking of the Director of the CIA’s e-mail “is something that could happen to anyone”.  Do you agree or disagree with this statement, and why?

2) The article goes on to say that Wikileaks has published “information such as Social Security numbers, passport numbers and addresses of his family and associates is causing great concern within the agency.  Among the documents released online is Brennan’s incomplete SF86, a questionnaire federal employees must fill out in order to gain security clearance. Along with personally identifiable information, this document includes personal information about his health, criminal history, questions about whether he’s used drugs and associations with foreign governments. Other documents, such as a letter from the vice chairman of the Senate Select Committee on Intelligence, a congressional bill from 2008 that would limit interrogation techniques, and a intelligence policy paper were also published”.   Do you think that the CIA Director’s e-mail server was hacked into, and all this material was gathered just from e-mails, or do you think that the CIA Director’s server was hacked into, and the hackers go into the server itself?   Is there a difference?