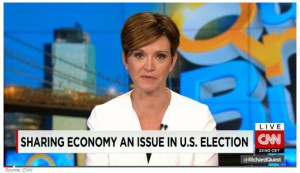 The rise of the “gig economy” has given Democrats from Hillary Clinton on down a tough issue to wrestle with, one that wedges them uncomfortably between Silicon Valley money and millennial digital natives on one side, and organized labor and disempowered workers on the other — in a fight playing out largely in America’s deep-blue big cities.

1) The article suggests that apps like Uber, which allow customers (like you) wanting a ride to connect with Uber-certified private drivers (like you), is something that is “bad for the Democrats”.   Why does the article think this is the case?