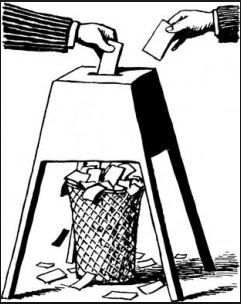 By manipulating its search results, Google could decide the next election.

The world’s most-used search engine is so powerful and national elections are so tight, that even a tiny tweak in Google’s (GOOGL, Tech30) secret algorithm could swing the 2016 presidential election, according to Robert Epstein, senior research psychologist at the American Institute for Behavioral Research and Technology.

1) The article say that Western Union attempted to swing the 1876 presidential election towards its favored candidate, Rutherford B. Hayes. The election was the closest in U.S. history, and Western Union used its telegraph network monopoly and exclusive carriage contract with the Associated Press to ensure that only positive stories about Hayes made it on the wire. Hayes ultimately won by a hair.  In a hyper-connected world like today, is this example from 1876 relevant?

2) The article also suggests that a rogue employee could tweak the Google search algorithm to swing the election.  What controls should Google have in place to prevent this?