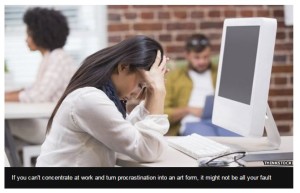 Professor Gloria Mark of the Department of Informatics at the University of California says email, social media, notifications and countless other digital distractions are eroding our ability to concentrate on individual tasks in the 21st Century.

“Back in 2004 we followed American information workers around with stopwatches and timed every action,” she says.

“They switched their attention every three minutes on average. In 2012, we found that the time spent on one computer screen before switching to another computer screen was one minute 15 seconds.

1) The article suggest you might use “Pomodoros” to help focus. Try “setting a kitchen timer or digital equivalent to 25 minutes and calling it a Pomodoro. It might take several Pomodoros to complete a project but each one must be distraction free. In-between Pomodoros a five-minute break is taken. The idea is to enhance concentration, reach a goal in stages and finish everything, instead of allowing a task to become too overwhelming.” Do you think this might work for you, and would you give it a try to see?

2) Why can’t you just switch your tech off and focus that way instead?