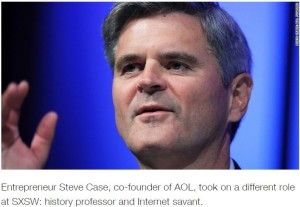 Steven Case, co-founder of AOL — who now heads up Washington, D.C. based venture capital firm Revolution LLC — spoke of the Internet in three waves. The first, of which he was a leading pioneer, ran from 1985 to 2000 and brought the Internet to everyday life. The second, from 2000 to the present, consists of entrepreneurs building on top of the existing Internet with companies like Google (GOOG), Twitter (TWTR, Tech30), Facebook (FB, Tech30) and the growing app economy. We are now on the brink of a third wave, according to Case.
“The sectors ripe for third-wave disruption account for more than half of our economy.”

Link (to post into browser to read article): http://money.cnn.com/2015/03/14/technology/steve-case-sxsw/index.html

1) Case identifies “four mega-trends for the third-wave disruption”. Do you agree with his assessment? Why are these four things so relevant now, in 2015?

2) His fourth mega-trend is “We’ll see an increased globalization of startups.” Hasn’t this been happening all along, as discussed back in 2004 by Tom Friedman in “The World is Flat”?