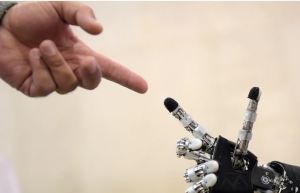 At large news agencies where speed is crucial, template-style stories have long been used for company results, allowing journalists to simply key in the relevant facts and numbers and fire off the dispatch.

Often disparagingly referred to as ‘churnalism,’ some of the larger media organisations — including the L.A. Times and Associated Press — have now turned to robots to take the grind out of formulaic dispatches. The L.A. Times uses the algorithms in its in-house software — called Quakebot – to produce reports on local earthquakes, using data provided by the US Geological Survey. The reports typically hit the newspaper’s website within three minutes of the tremor being recorded.

1) What does it say about journalism as a profession, and something many of us rely on, when articles can be written by robots?

2) What are some useful applications of this technology within your school (not for homework!) or a company you might like to work for?