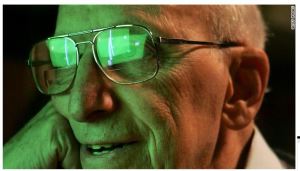 Ralph Baer, the inventor of the first home video game console, has died. He was 92.

Baer was waiting for a friend at a bus terminal in New York City when an idea gripped him and he began scribbling on a note pad. The idea was a “game box” that would let people to play board, action, sports and other games on most television sets.

A boss at his job gave him $2,500 and two staffers to pursue the idea. Baer and his employer, Sanders Associates, would file for the first video-game patent in 1971.