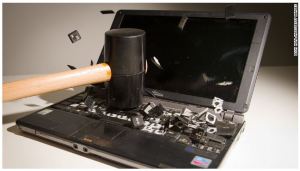 Our modern global communications infrastructure still relies on core principles that were defined when the Internet had only a few thousand users. We have faster computers, more storage space, and more people using the network, but worryingly, some of the key assumptions haven’t changed.

As an example, take the protocol that helps determine how data gets to its destination. Different networks in the Internet “advertise” routes to deliver data to other networks, with the most efficient candidate being chosen. In early 2010, a mistaken advertisement from China Telecom caused a small but significant proportion of global Internet traffic to be mistakenly routed through China. Concerns such as these were not foreseen by the early designers; back then, the Internet was operated by people who knew and trusted each other.

1) The author states “The huge benefits that the Internet offers are increasingly balanced by concerns regarding balances of power, equality of access, centralization, security, and mass surveillance.” Is this list complete, and do each of the items in your complete list deserve the same weight? Why did you assign different weights (if you did) to the items?

2) The author also states “In the future the Internet will need to develop technically to support its growing population and the rapid increase in connected devices, but it will also need to develop institutionally to support the needs and desires of developing nations that are massively underrepresented in the debates surrounding the Internet’s governance and institutions.” How much say should developing nations have when much of the work has been funded by the U.S.?