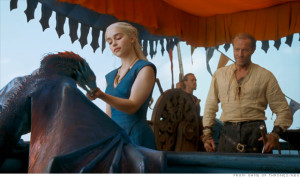 If those who download “Game of Thrones” illegally were paying, the show might be able to afford a few more dragon scenes, co-creator David Benioff told CNN.

Discussion:  The Sunday night season 3 premiere of HBO’s Game of Thrones topped the modern-day piracy record when more than 1 million viewers downloaded the episone in the first day after it aired.  TorrentFreak, a piracy tracker, said that at one time 163,000 people were simultaneously sharing a single torrent, which beat the previous record of 145,000 people set by the TV show Heroes in 2008.  The president of HBO said that he considered the piracy a sign of success more than a problem, but it is stagging to imagine the funds that would have been collected if each person had paid .99 per download.  That amount of money could buy a lot of additional special effects.