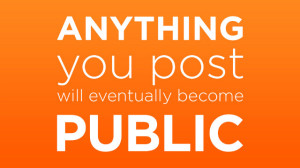 Above is one of our 12 Rules of the Internet. CNN commenters told us what we’d left out.

Discussion:  After CNN posted its article, “Meet the Rules of the Internet”, the comments were many in number and mixed in thought.  The original story explained the origin of the Internet’s “rules”, originally just a set of guidelines/inside jokes spawned by a variety of sources.  Some of the responders campeigned for other rules to be added to the list–like Goodwin’s Law–that states that “as an online discussion grows longer, the probability of a comparison involving Nazis or Hitler approaches”, or the rule that “if anything you see upsets you, it is your problems, not the poster’s”.  Other responders took the stance that “the only rule of the Internet is that there are absolutely no rules”.