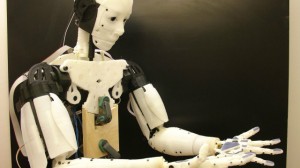 Discussion:  Gael Langevin, a French sculptor, has designed a robot whose parts can all be printed on a common 3D printer and assembled in one’s home.  InMoov, Langevin’s animatronic creation, can be made by anyone with access to little more than a basic 3D printer, a few monitors, a cheap circuit board and about $800.  The project began as Langevin uploaded his design file for a prosthetic hand that he created for a commercial photo shoot to Thingiverse, and received an overwhelming response.  Langevin then began uploading the printer files and assembly instructions, body party by body part as they are complete, along with some basic programming instructions, to his blog so that others may build their own robot in the comfort of their homes.