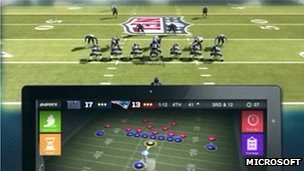 Discussion:  Microsoft’s Xbox consoles can now communicate with users’ smartphones and tablets.  Xbox’s new SmartGlass app, unveiled Monday at the E3 conference, allows users to control games with their touchscreen tablets, and also allows handhelds to act as controllers for the firm’s Internet Explorer web browser on users’ television screens.  Microsoft is allowing users to extend the functionality of their existing games with third-party devices they may already have.  They are, in essence, “turning any TV in to a smart TV.”  All the electronic devices in your home can now be connected and integrated with the SmartGlass service.