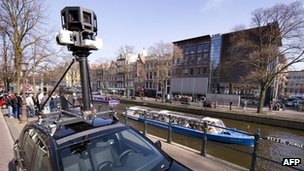 Data gathered by Street View cars in more than 30 countries included passwords, emails and other data

Discussion:  The FCC fined Google $25,000 for intentionally impeding and delaying an investigation into Street View, Google’s street mapping system.  Street view cars in 30 countries logged private information, such as passwords and email addresses, from unsecured Wi-Fi networks.  The FCC has significant questions about the Street View project, and have subpoenaed the Google engineer who developed the software code.  Google stated that they do not believe that they have violated any laws.