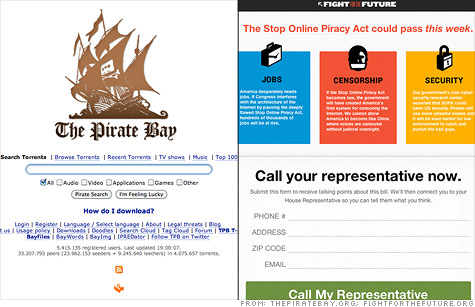 SOPA's backers say the sweeping anti-piracy bill is needed to squash sites like The Pirate Bay (left), but the tech industry says the bill is rife with unintended consequences.

Discussion:  SOPA is a controversial bill that is currently being debated in the different branches of the government.  If passed, it would allow the government, or some other authoritative body, to block websites that are known to pirate music from being searchable in the United States.  People opposed to the bill argue that this is a form of censorship, and those for the bill are adamant that something has to be done to quell the sharing of copyrighted material on the internet, and this is the way to do it.