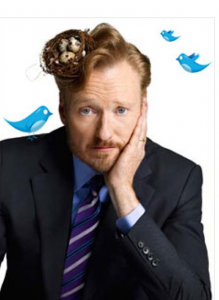 How Conan accidentally fought his way back into bedrooms (and computers, smartphones, and tablets) across America.

Discussion: How does a self-proclaimed computer Luddite go from host of The Tonight Show to unemployed to a sold-out national comedy tour?  The power of social media transformed Conan O’Brien’s career from a late night television host with no show to an improv sensation on stages across the country.  And the numbers are impressive: Conan, aka Coco, has 1.1 million “friends” on his original fan-generated Facebook page and he holds the single-day record for gathering followers on Twitter.  Not bad for a Luddite.