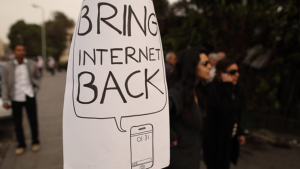 It seemed so easy in Egypt. Could the same happen in the U.S.?

Discussion: Internet experts say no, shutting down the entire U.S. Internet would be pretty much impossible.  Both the technical infrastructure and the legal framework within the U.S. would prevent the government from fully clamping down on the country’s thousands of Internet providers.  And shutting down the global Internet would be even a bigger, unlikely feat.  According to one industry expert, “the Internet is so decentralized that there is no kill switch.”